When debates rage about who is the best outside half ever produced by Wales there is always a long list of candidates. The lineage normally starts with Percy Bush and Billy Trew, moves on to Cliff Jones and Cliff Morgan, takes in David Watkins, Barry John and Phil Bennett and then considers Jonathan Davies, Neil Jenkins, Stephen Jones and, these days, Dan Biggar.

There are always honourable mentions for Dick Jones, JMC ‘Clem’ Lewis, Glyn Davies, Billy Cleaver and Gareth Davies, but one name that doesn’t always spring to mind is that of WTH ‘Willie’ Davies. It should!

Born in Penclawdd, he was entered onto the Welsh Sports Hall of fame’s exclusive ‘Roll of Honour’ in 2003.

TEENAGE TORMENTOR OF ALL BLACKS

It was the captain of the 1935 New Zealand tourists, Jack Manchester, who coined the immortal phrase to the Kiwi press after Swansea had beaten his side 11-3 at St Helen’s:  “Tell them back home we lost, but, please, don’t tell them that we were beaten by a pair of schoolboys.” 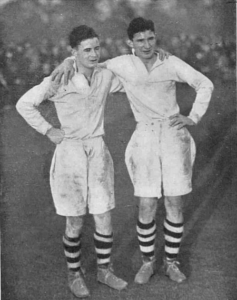 The ‘schoolboys’ referred to were cousins Haydn Tanner and Willie Davies. They were both in the sixth form at Gowerton County School and the Swansea selectors had to convince their headmaster they were up to facing the hitherto unbeaten All Blacks. They more than proved their worth as the Whites became the only club team to beat Manchester’s men on their tour. Wales and England followed suit and Ulster forced a 3-3 draw.

“A sprite with the touch of genius, that instinctive eye for the opening which marks the perfectly balanced, and with a change of pace and direction sufficient to carry him through smallest gap like an elusive ghost” – Daily Telegraph on Davies

A year earlier the two talented teenagers had teamed-up for the Welsh Secondary Schools and in April, 1935, they had been taken on the Crawshay’s tour to Cornwall. They had clearly been identified as very special talents and been put on the fast-track to stardom. In the case of scrum half Tanner, the Swansea win earned him a first cap against New Zealand in Cardiff three months later. He’d end up on the winning side in that game as well and went on to play 25 times for his country over 14 seasons. He also toured with the 1938 British & Irish Lions and was widely recognised as one of the greatest scrum halves in the world game. 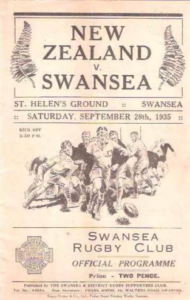 The selectors, and the rest of the country, were split on who should partner Tanner in the international. In East Wales the vote went for Cardiff and former Cambridge University star Cliff  Jones, while the whole of West Wales was rooting for Davies.

Jones got the nod and kept his place after occupying the outside half berth for the previous two seasons. He would eventually win 13 caps between 1934-38 and captain Wales in his final three games. Davies had to bide his time and won his first cap out of position at centre in the 3-0 win over Ireland in Cardiff. The Welsh win earned them the Championship title ahead of the Irish and made it an unbeaten international season after wins over New Zealand and Scotland and a 0-0 draw with England.

Davies and Tanner teamed up for Wales for the first time at Twickenham in 1937 in an agonising 4-3 defeat that was achieved with a freak drop goal from England wing Hal Sever. There was another defeat, 5-3, to Ireland in Belfast before Jones returned from injury to play in the 1938 Championship.

The Big Five then returned to the Swansea partnership for the 1939 season. Wales were once again pipped by England at Twickenham, 3-0, before beating Scotland and Ireland to share the Championship. Davies distinguished himself in the 7-0 win over the Irish at Ravenhill by dropping a goal – the last four point drop goal scored by a Welshmen in an international match – and scoring a try to bag all his side’s points and end a run of three successive defeats at the Ulster venue.

That was the last international played by Wales before WW2 and the last of Davies’ eight Welsh union caps.

While his cousin, Haydn Tanner, went on to become a union legend, Willie took a different course and became a global star of the 13-a-side code. On 16 August, 1939, by this time playing for Headingley, he decided to turn professional. He joined Bradford Northern rugby league club for a princely four figure sum after three months of negotiations. He had graduated from Swansea University and then taken a teaching qualification at Carnegie College, in Leeds. The Bradford chairman helped to fix up a job teaching sports and geography at St Bede’s and Bingley Grammar School and that clinched the rugby league club’s biggest signing to that point in their history.

Despite his slight build he became an instant hit in rugby league with his attacking flare and was in the Bradford Northern side that made history by becoming the first side to reach three successive Wembley Challenge Cup finals in 1947-9. They won in 1947 and 1949 and in the first of those victories he became the first Welshman to win the coveted Lance Todd Trophy as the man of the match. In the 1949 game, which Bradford won 12-0 against Halifax, he played in front of a record crowd of 95,050. 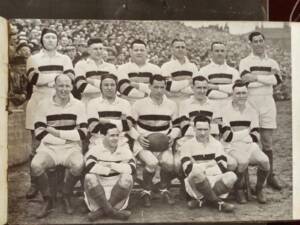 Prior to those three wins he had featured in the War-Time finals in 1944 and 1945. Bradford won the first of those two-legged affairs against Wigan, but lost the next year to Huddersfield.

He served in the RAF during WW2 and the war years allowed him to play rugby union once again. They combined to steer Wales to seven successive wins over England in Services internationals between 1942-45. Davies captained his country in four games and Tanner in two. Wales won 17-12, 9-3, 11-7, 34-7, 11-9, 20-8 and 24-9. They were also back in the groove in 1945 helping a Great Britain XV beat the Dominions 36-13 at Welford Road and the beat British Empire Services beat French Services 27-6 at Richmond. Davies also played against Tanner at St Helen’s that same year when he helped the RAF beat the Army 8-6.

Mixing and matching his rugby codes was certainly the order of the day during WW2, but his focus returned to league once the war ended. He made his Great Britain debut against New Zealand on the 1946 British tour and then faced the Kiwis twice more back in England in 1947. At club level, Bradford won the Yorkshire Cup six times during his time at the club and the Yorkshire League three times. They also won the War Time Championship three times.

Davies was given a benefit year in 1948 and finally hung up his boots in 1950. He took up a teaching post at Weston-Super-Mare Grammar School. He remained there until retirement and died on 26 September, 2002, aged 86

The final word on his talent should go to his cousin, Haydn Tanner, and great rival, Cliff Jones:

“Willie’s was the outstanding example of an athlete with perfect rhythm, it was a joy to watch him run through the opposition without any apparent effort,” said Tanner.

“More than anyone ever, Willie most resembled the classical fly-half of every imagination,” said Jones. 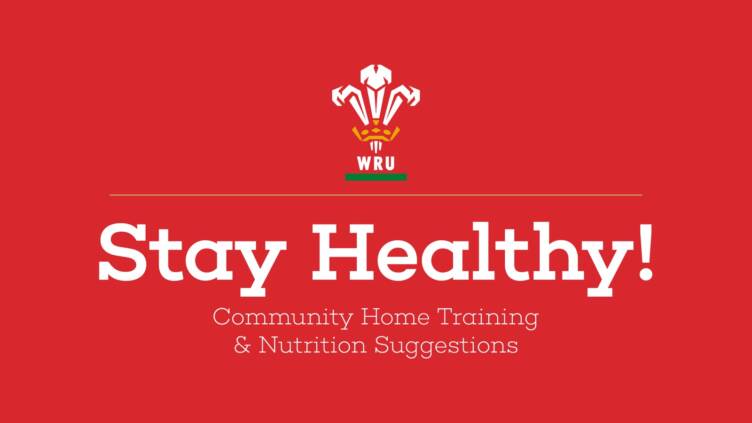 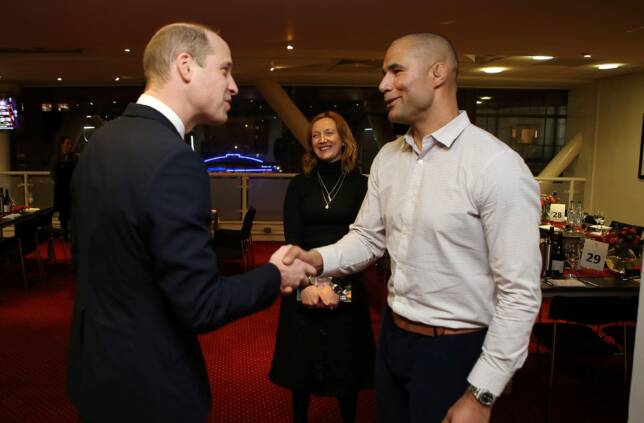