The most interesting things on tour tend to happen off the field, and as Wales number eight Emyr ‘Tarw’ Lewis tells it, the summer trip to Southern Africa in 1993 was no different.

Overseen by head coach Alan Davies, Wales were undeniably the strong favourites for Tests against Zimbabwe and Namibia – even more so because they were virtually full-strength. The Lions had taken five Welshmen to New Zealand, only one of whom, flanker Richard Webster, was a forward.

Furthermore, only Ieuan Evans from that year’s high-flying Llanelli team was in New Zealand, meaning the spine of the Welsh side was bolstered by players high on league and cup glory.

“We had only one Llanelli player with the Lions, while the other four were from Swansea,” says Lewis, whose name had already been etched into folklore thanks to that drop goal against Neath in the cup final. “It was a crazy scenario, but with so many of my teammates from Stradey in the Wales team, it felt like home amongst them. We went out on tour with a lot of confidence because of that successful season with Llanelli. Also, having never been to anywhere like Zimbabwe or Namibia before, I was really looking forward to the trip.” 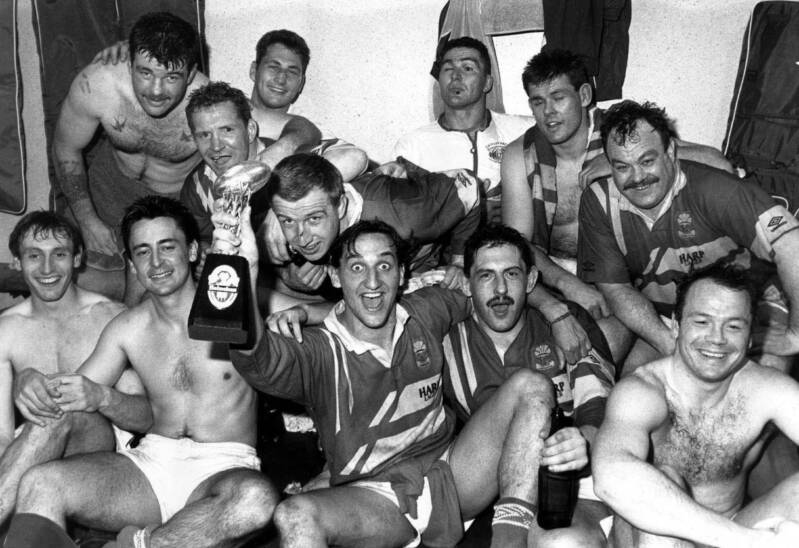 A large number of Llanelli's '93 league-winning side made the Wales tour that summer.

Much was made of the England cricket team’s first senior tour to Zimbabwe in 1996, but there was less fanfare when the Welsh rugby side visited three years earlier. While the cricketers’ time there was described as “a disaster zone” for Mike Atherton’s struggling side, Wales fared decidedly better.

When they arrived at their hotel in the heart of Bulawayo, the scene was suitably lively. “There was a lot of hullabaloo and security around the place,” remembers Lewis. Unfortunately, it wasn’t due to Wales’ finest being in town. “It turned out we were staying in the same hotel as Robert Mugabe.”

That same month, Mugabe, the Republic’s first president after spearheading its independence in 1980, would announce his land reform programmes – the repercussions of which are still being felt seventeen years later.

According to Lewis, Wales weren’t attuned to the political goings-on in the country formerly known as Rhodesia. “It wasn’t anything we were really aware of. We were there to play rugby and enjoy this beautiful country.”

Another sign that Wales were a long way from home came in the form of their finances. “The game was amateur then so we weren’t allowed to be paid,” Lewis says. “The only thing we were given was something called a ‘communications allowance’. [Team manager] Bob Norster asked whether we wanted all our communications allowance in Zimbabwean dollars, but he explained to us that once we had the money we couldn’t take it out of country because it would be worthless.

“Because we were in Zimbabwe for ten days, we said we’ll have ten days’ worth of communications allowance, so he brought down all these Zimbabwean dollars. Well, I’ve never seen so much money in all my life. The first night we went out, we couldn’t spend the money: ten pints of beer worked out as being the equivalent of one pound!”

By the end of their stay in Zimbabwe, the players couldn’t get rid of their money. “We tried gambling it off, but we ended up winning. Everybody decided at the end to give it to the bus driver, who was absolutely wonderful. He did everything for us, getting up every hour to give us lifts. We gave him all this money and he burst out crying.”

They had just given him two years’ worth of wages.

In his programme notes, ZRU president Basil Forster-Jones wrote: “There is no doubt this is the most important and strongest team to visit Zimbabwe for many years.”

Referring to the Lions team that played a warm-up match in Bulawayo in 1938, Forster-Jones added: “We have in the past had many distinguished Welsh players visit us but never a Welsh National side …. More recently the names of Gareth Edwards and Gareth Davies spring to mind. These famous players have been a talking point in our country for many years and will long be remembered. The Welsh are renowned as a hospitable and friendly nation.”

The opening Test in Bulawayo finished 35-14 to Wales thanks to tries from Phil Davies, Simon Hill, Rupert Moon and Wayne Proctor. “It was hot and very physical, but we did quite well in that first Test,” says Lewis. “They didn’t have the power of a top tier nation, so it was quite convincing in the end. The high temperature is always an issue when you’re playing in somewhere like Zimbabwe, but your skill levels will often outweigh the heat.”

A host of colourful characters toured that year, chief among them flanker Lyn Jones, who made his debut in Bulawayo. “Lyn was asked to sing a song for his initiation,” recalls Lewis, his Llanelli teammate. “He said, ‘Okay, but you’re all going to know it so please join in the chorus.’ And he sang Blodwen and Mary. Everyone looked at each other. Only the Welsh speakers in the team who listened to Ryan a Ronnie knew it!” 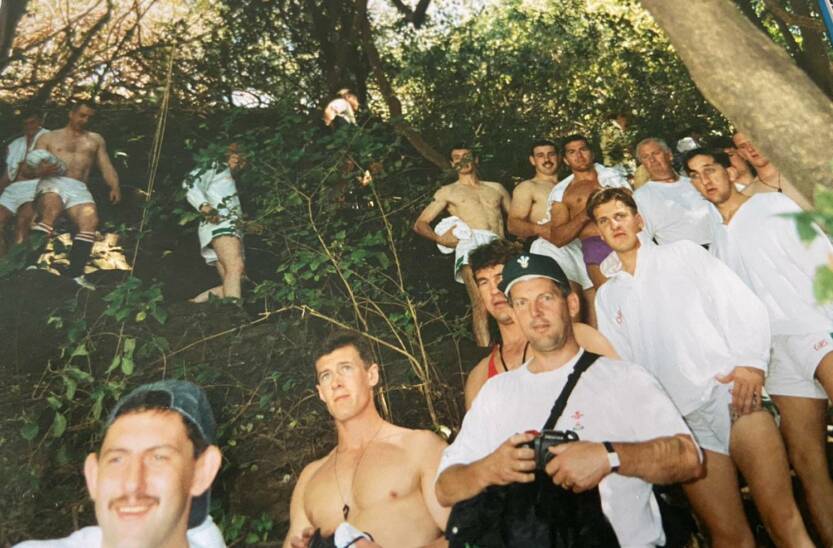 The squad goes on a hike through the jungle in Zimbabwe.

Wales’ preparations for their second Test against Zimbabwe in Harare was nothing if not unique. They stayed at the Elephant Hills resort, training on a golf course designed by the legendary South African golfer Gary Player. “One of our guys kicked the ball onto the fairway and started walking towards the ball,” says Lewis. “All of a sudden we heard someone screaming, ‘Don’t go anywhere near that ball – they’ll attack you!’ There were wild boars on the course with their little ones. We had to leave the ball there.”

Lewis still sounds awestruck by the landlocked country all these years later. “It was a phenomenal place. When we arrived at the resort it was dark, so what I saw when I opened my curtains in the morning is something I’ll never forget. You could look across this vast plain, then all of a sudden out of nowhere, what I could only describe as a mushroom cloud of spray and mist coming out of nowhere. It was coming from the Victoria Falls. It was absolutely surreal.”

A midweek match against Zimbabwe B saw the tourists claim a 64-13 win. That and the two other uncapped fixtures on tour (against Namibia B and South African Barbarians) weren’t made up of mere dirt-trackers, with future stars like Rob Howley and Robin McBryde cutting their teeth alongside more seasoned teammates.

The second Test, held at the Police Grounds, went even better for Wales than the first. Lock Gareth Llewelyn, the tour captain, scored two of his side’s six tries in the 42-13 triumph. 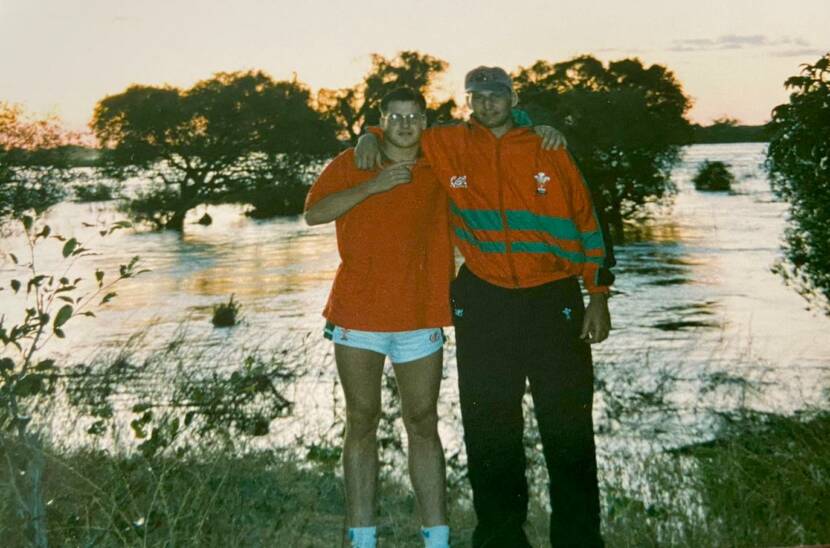 Neil Boobyer (who made his debut in Bulawayo) and Lewis on the bank of the Zambezi.

From there it was a seven-hour flight from Zimbabwe, across neighbouring Botswana, and into Namibia. A newly-independent country, Namibia had invited Wales to play there in 1990 to celebrate its acceptance by the International Rugby Board. They ran Wales very close across the two Tests, and the following year beat Ireland twice.

“The climate was very similar to Zimbabwe,” says Lewis. “Every time we went out to train we had to remove beetles the size of your fist from the pitch. It became a strict regime for us, but those who didn’t like bugs stayed well away.”

Their brushes with local wildlife didn’t end there. “We went on safari and boated down the Zambezi river while it was in full flood. That was an experience. We could hear hippos making noises in the middle of the night.”

For all his happy memories from that tour, perhaps the one Lewis cherishes most is the Test match against Namibia in the capital, Windhoek. “I remember it well because I didn’t score many tries for Wales, but there I scored twice. We were actually under the cosh a bit in the second half.” In fact, Wales were one point behind the Welwitschias after an hour of play. “They were really pushing us. I got put into space on their 22 and managed to cross over for my first. The second one was from a lineout. It was a tough old encounter, though.”

Hailing from Carmarthen, Lewis knew what to expect from a Namibian side full of farmers. “They were big, strong boys, and it took us a while to break them down,” he says. Wales eventually did, winning 38-23. “After the match, they paired us up with the Namibian players. Now, imagine a massive field where there are barbecues going on everywhere.

“You would go with one of the Namibian players and stay at that barbecue, and on it was everything: zebra, crocodile, every meat you could imagine. They even made their own alcohol, which wasn’t the nicest. But then again, you needed something to wash down the crocodile meat.”

Considering the warm welcome Wales received, it was no surprise Lewis’s teammate Phil Davies would return to Namibia in a coaching capacity 21 years later.

“It was just incredible to immerse ourselves in their culture,” says Lewis. “We were all sitting on bales of hay. It was like a twmpath at home.

“I feel blessed when I think about all the places rugby has taken me.” 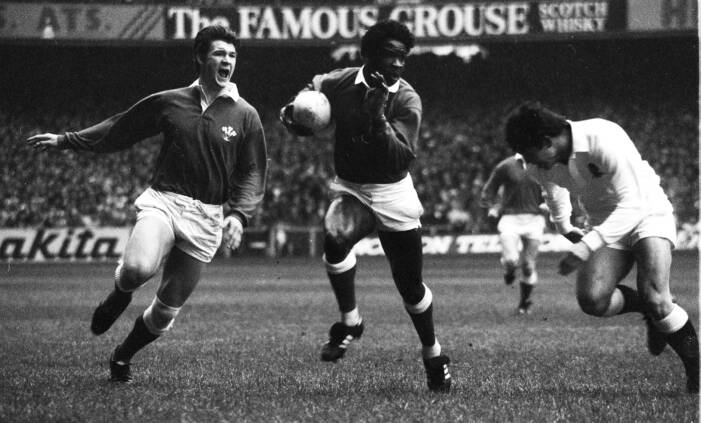 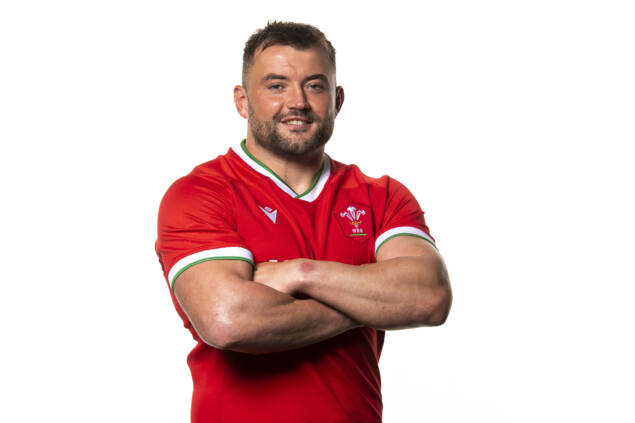