The last thing a young, ambitious rugby player wants is a new signing blocking his path to first team rugby but Dragons centre Aneurin Owen was of a completely different mindset when Wales and British & Irish Lions mega-star Jamie Roberts pitched up at Rodney Parade in the summer.

It wasn’t as if Owen, who was a pivotal figure in Gareth Williams’s Wales U20 squad for the two previous seasons, didn’t have enough competition already with the likes of Adam Warren, Jack Dixon, Connor Edwards, Tom Griffiths and Nick Tompkins all on the books chasing starting spots in the heart of the Dragons’ midfield.

“If that was me maybe a couple of years ago, I would’ve have been a bit gutted about it,” said the highly-rated Owen, “but for some reason I was just really excited and quite pleased about the signing.

“I thought if you are going to have someone in the squad who has done everything in rugby and been all around the world, there is no better person to learn from,” said the former Ysgol Gyfun Gwynllyw pupil.

“Jamie is someone who has played top level rugby for so long and just by training with him, you can understand why. Some of the traits and little things maybe people don’t see, you can actually pick up and take into your own game so his arrival has been really positive and it’s benefitted me massively.”

They say actions speak louder than words and Owen is soaking up everything Welsh stars Roberts and Tompkins are doing on a day to day basis in training, like a sponge. 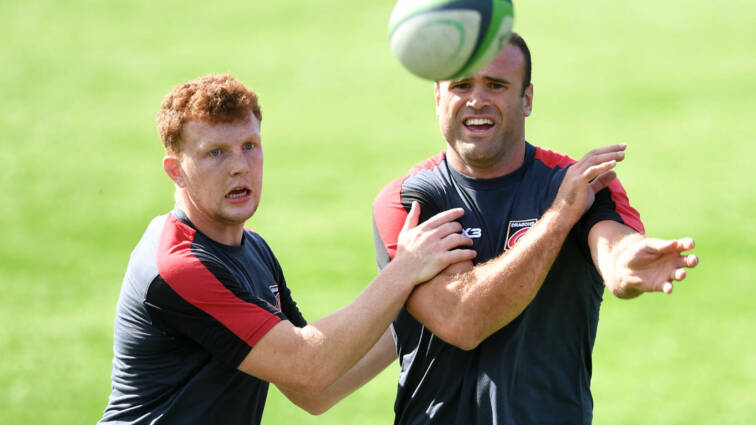 “It’s not like every second of the day Jamie is trying to pass on his knowledge, just him being in that environment and the way he is in meetings, he doesn’t even have to be talking directly to you and it’s the same with Nick [Tompkins],” says the articulate Owen. “It’s just their professionalism, the way they approach training and the standards they set themselves, you can gauge what it’s all about, you can speak to them if you want and they’re happy to speak to you but you can easily pick up things by training with them.”

The 20-year-old is currently in his first full season of regional rugby, although this is the second year he has been training with the senior group. As pre-season began, he admits he was full of excitement as it had been a long held dream to play for his home region.

“We had made a couple of signings, particularly in my position, so I was really excited to get involved, but first of all I was just thankful to be training and going back to play some rugby because of COVID. I just wanted to try to get amongst it, and learn as much as I could because there are some experienced boys there.”

Owen’s dream became a reality when he came on as a replacement against Begles-Bordeaux at Stade Jacques Chaban-Delmas in the Heineken Champions Cup. In doing so, he became the 300th player to be capped by the Dragons.

“I only got told about the figure after the game – it was pretty cool but I think making my debut was something I wanted to do for a long time and growing up I always wanted to play for the Dragons so it wasn’t really about being 300 but just getting on the pitch and playing for them and it’s all about kicking on now really.”

Owens was earmarked to make his regional bow earlier but circumstances conspired against him. 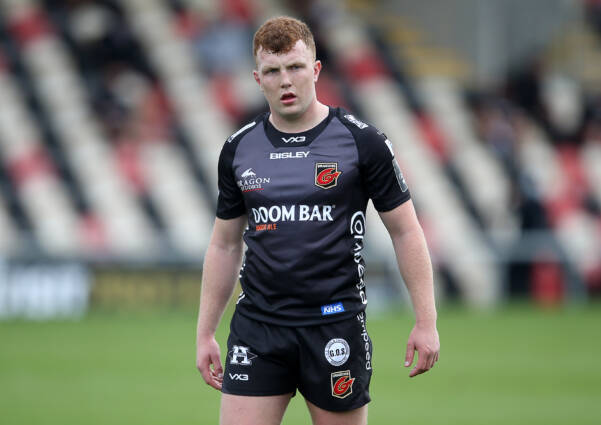 Aneurin Owen has always wanted to play for his home region, the Dragons

“I was on the bench for one of the games but Wales released Nick [Tompkins] a week early so he went on to the bench, so I ended up being waterboy so that was a different experience.”

So at that stage, did he think his chance had passed him by?

“You sort of think that but you have just got to be patient, understand you’re young and you have got to keep working hard and eventually it will happen,” he responds.

Owens then had his first taste of derby rugby at Parc y Scarlets on New Year’s Day, coming on as a second half replacement where his deft handling skills and strong defence earned plaudits from head coach Dean Ryan after the game, in what was a disappointing defeat where his ex-Wales U20 teammate Sam Costelow stole the show with a superb solo try.

“Again it was another experience to learn from and get better from,” he says. “The more games you get involved in at that sort of level the better it is for you. I had a little chat with Sam afterwards – that was good as it’s always nice to see old mates – I really enjoyed the experience as it gives you a bit of confidence to understand you can play at that level.

“Coming on in those sorts of games, I had about a half to play, so understanding you can play at that level gives you a lot of confidence and you can try and push on and get better and try and work your way up really.”

When the 20-year-old Owens eventually made his regional debut, he followed fly half Evan Lloyd, prop Luke Yendle and second row Ben Carter as graduates from the Dragons academy who have now all played in Europe this season. Owens believes it’s testament to the Dragons academy programme that youth is being given its chance by Ryan.

“The group we have had coming through the academy has always tried to create that type of mentality where we push each other on and keep trying to get better. A lot of us have been wanting to get an opportunity and if you are patient enough eventually you will get a chance. Ben Carter is one of the hardest working boys I know, he 100% deserves an opportunity and he showed in the Glasgow game how good he can be. It’s only positive to see boys like him, Evs and Luke come through.” 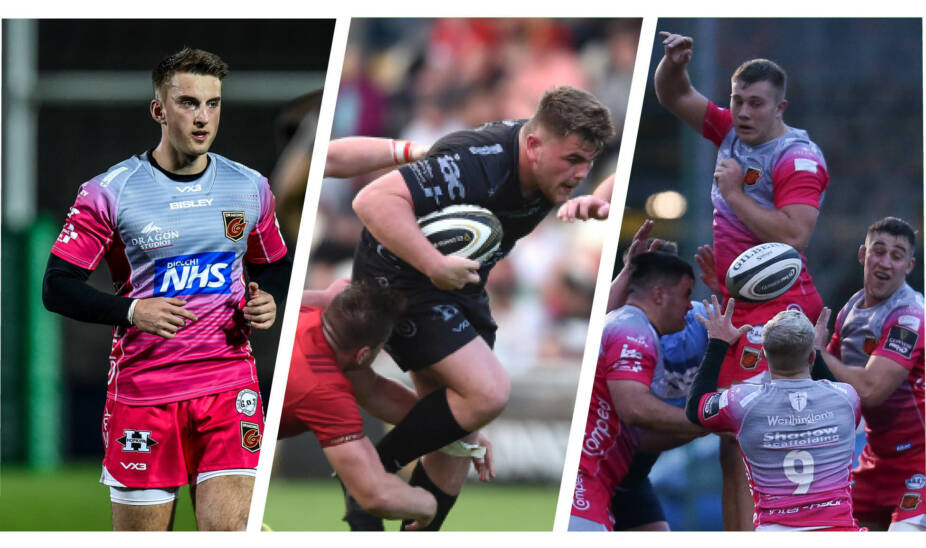 Owens mentions tighthead prop Luke Yendle as an example of someone who took his chance when it came in unexpected circumstances. Due to the match day squad being rocked with a COVID outbreak, Yendle was added to the bench at the 11th hour against Wasps in their Heineken Champions Cup opener at Rodney Parade.

The Dragons scrum had been under immense pressure all game but the rookie came on late in the game and added plenty of ballast to the set-piece.

“It’s about just taking your opportunities however they come, whether it’s through being patient and working hard and you’ll eventually get an opportunity or if it comes through a way like COVID or injury, just taking it and grab it with two hands and Luke’s doing really well.”

Alongside the young quartet who have earned their stripes in Europe this season, the likes of Rio Dyer, Taine Basham and Jared Rosser have all come through the Dragons academy system and Owens is hoping they can be a catalyst to a brighter future at Rodney Parade. 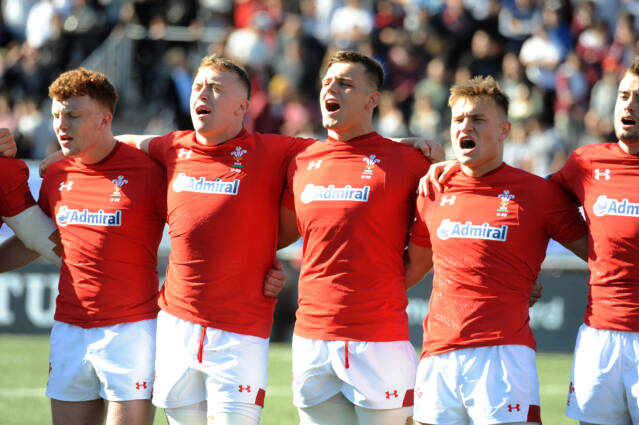 Aneurin Owen figured for Wales U20 on 11 occasions

“A lot of people have been talking about potential for a long time with the Dragons,” he says. “It’s been the buzz word for a long time now, there is a lot of chat about ‘young players’ stepping up and making that transition to become regulars and creating a group where we’re competitive in the league and in Europe. That is something Dean [Ryan] is definitely trying to do and there are a lot of us trying to do that. There is also now a group with a lot more experience so we’re definitely wanting to turn that potential into something with more substance.”

As we enter a new year, Owen’s mind is set on what the Dragons have to do for the rest of the season.

“Win as many games as possible, keep improving, which I genuinely feel we are doing. I don’t know how that looks from the outside, but from me within, and looking at the squad, I genuinely feel we’re getting better and there is a foundation built now and there’s some sustainability there – we’ve got to keep pushing each other and then hopefully create good performances and more wins will follow as we can keep building.

“All things considered, I was really happy to make my debut and I’ve just got to keep pushing on now. You want to learn as much as you can from the centres but you also want to keep pushing them and keep trying to take their spot. Create that environment where you’re pushing each other but learning from each other.

“As a youngster I really enjoy being there because they are already a good group of boys so I’m really happy with where I am at the moment. Everybody at the Dragons cares for the group and the region so everyone’s working hard to get better.” 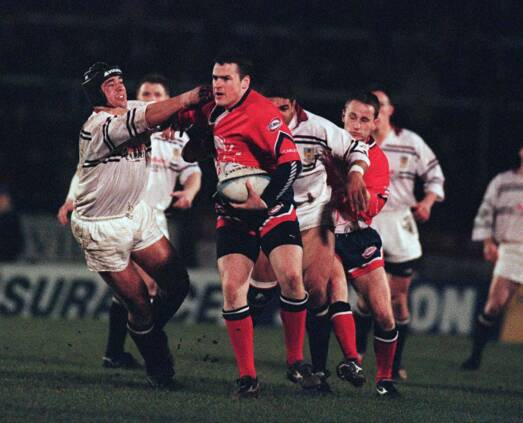 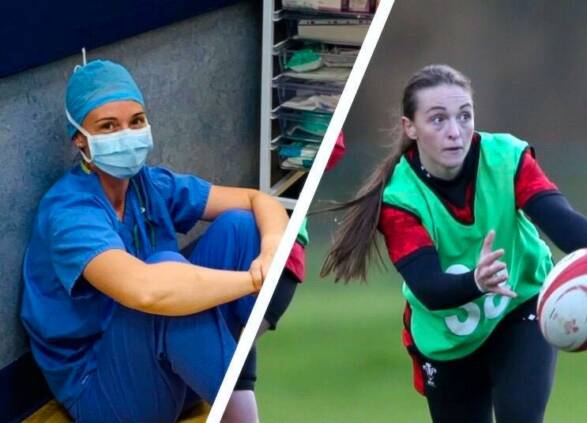 Knight back doing what she loves after tough times