Everyone in Tokyo seems to be chasing a gold medal, but for two Welsh referees the ultimate prize will be to follow in the footsteps of one of the greatest of all rugby officials in taking control of an Olympic final.

Both Craig Evans and Adam Jones have had Tokyo on their minds ever since they joined the sevens circuit on the World Series. Evans is refereeing in the men’s event, while Jones is involved in the women’s tournament.

Hanging on for an extra year to reach Tokyo hasn’t been easy, given their advances in the 15-a-side game, but they were both determined to see out their commitment to the shortened version and now have their eyes firmly fixed on following Albert Freethy in being an Olympic final referee.

As Rugby Sevens started in Tokyo this week, so the two officials chased their dream and hoped all the hard work in the heat chambers at the WRU High Performance centre had properly prepared them for the hot and humid conditions in Japan.

“It has been a five year journey to get to Tokyo. It is pretty crazy to think I’m refereeing at the Olympic Games,” said Jones, who has already refereed at the Commonwealth Games, Rugby World Cup Sevens and on the World Series.

“When I first went onto the World Sevens series circuit in 2016 it was just to get some experience. As I stayed on year on year I could see there was a chance of pushing for a place at the Olympic Games.

“I found out 18 months ago that I was on the list. It has been a long wait since then and it took some time to sink in that I was actually going to go to the Games. 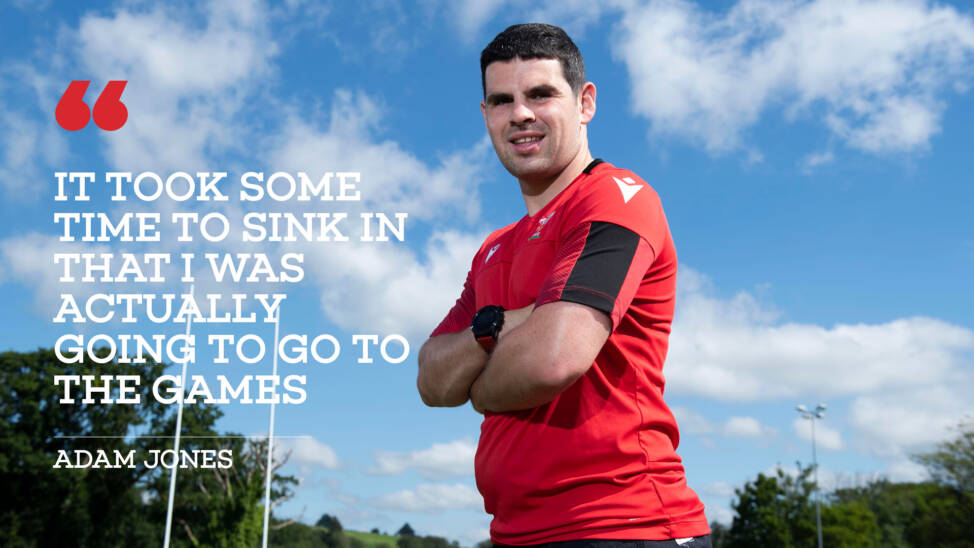 “Everything had gone really well for me in the 15-a-side game recently, with games in the PRO14 and Europe, but I was never going to pass up the opportunity to become an Olympian. That is something nobody can take away from me.”

Refereeing the top nations at the Olympics is just another step-up the ladder of success for Evans, who took charge of his first Tier 1 nation international at Twickenham before he left when England hosted Canada. Now he is becoming an Olympian.

The trip will give him a chance to catch up on some sleep after his partner, Chelsie, delivered their first child this month. It will be a wrench to leave him, but when he returns he can tell him his dad went to the Olympics.

“It is a huge honour being involved and it is going to be an awesome experience. It is something that both Adam and I have been working towards for a long time and it is hard to believe the time has finally arrived,” said Evans.

“I’ve been doing as much as I can to help Chelsie since the baby arrived and there are going to be lots of video calls back home to check up on him while I’m away. It was hard to leave them, but this is a once in a lifetime opportunity.

“I’ll be concentrating on 15-a-side rugby when I return and Tokyo really is the pinnacle of five years hard work for me.” 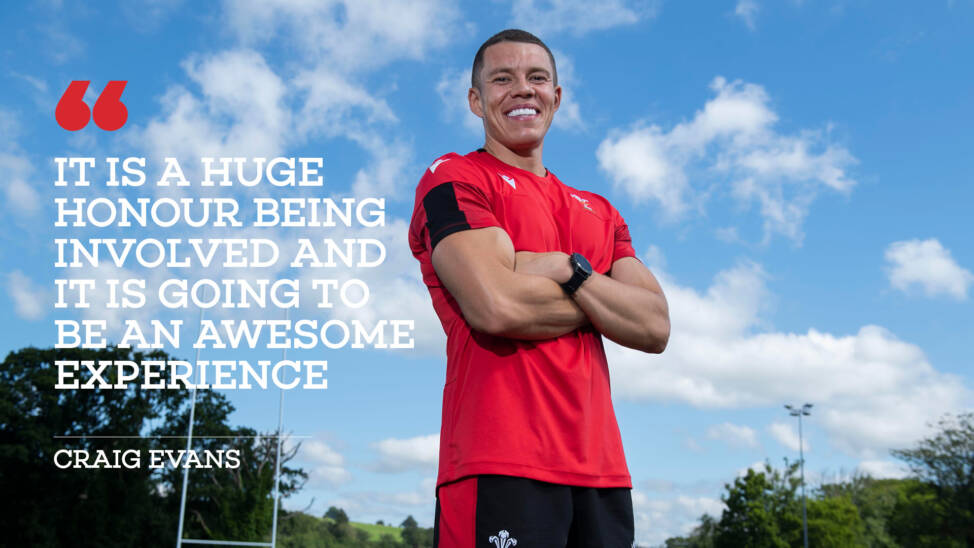 As well as Freethy, the French-based, Merthyr-born Charles Leyshon was also involved. A cousin of the great Cardiff and Wales wing Johnny Williams, he worked in Nantes before moving to Paris. He took charge of the game between the USA and Romania and sent off the American Ed Turkington.

During the German occupation of France, being Jewish he was arrested by the Germans in July, 1944, and deported to Buchenwald, where he died in the concentration camp four months later, aged 69.

“At first, we were told we were the first Welsh referees to be involved in the Olympics. It was great to discover the history of Albert Freethy and Charles Leyshon from 1924,” added Jones.

“The goal is to try to follow in the footsteps of the famous Mr Freethy and get picked to do the final. That would be a real honour, although once I blow that first whistle I will be an Olympian and that will be very, very special.

“Back in 2012 I won some tickets to go and see some swimming heats at the London Olympics. It was all the preliminary races, but it showed me then that the Olympics is for everyone and almost 10 years on I’m a part of it.

“The spirit of the Olympic Games means it is inclusive for everyone, regardless of whether or not you win a medal,” he added. 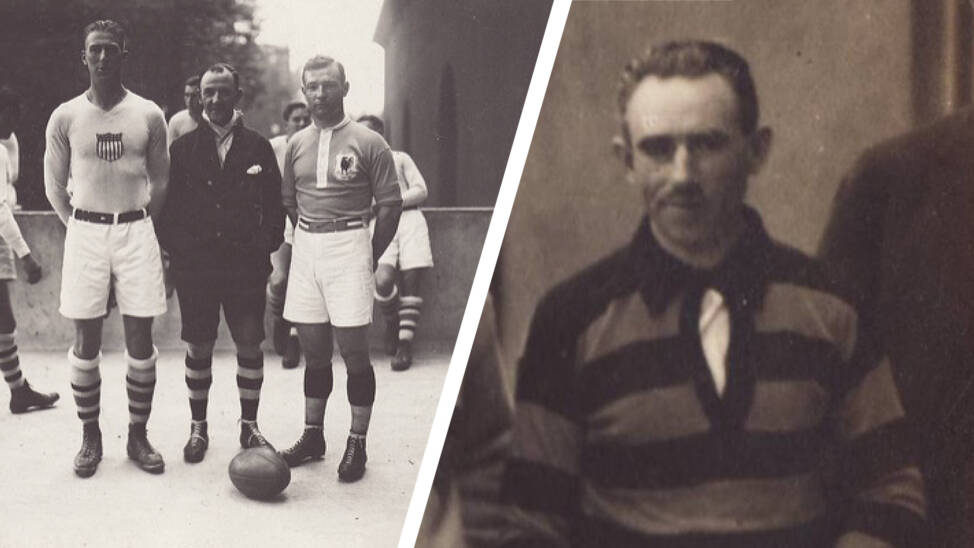 Albert Freethy and Charles Leyshon refereed at the Olympics in 1924

WHO WAS ALBERT FREETHY?

For Nigel Owens, Derek Bevan, Clive Norling or Ivor David in the post-war period, read Albert Freethy for the years before.

He was quite simply the most famous Welsh referee of his era and achieved global notoriety for becoming the first referee to dismiss a player in a major international match. It happened at Twickenham in 1925 when he sent off the New Zealand second row Cyril Brownlee in the game against England.

“The match was always going to be a tough contest to control. The English team were coming off back-to-back Grand Slams in 1923 and 1924 and hadn’t lost a match in three years. The All Blacks had swept all before them on an unbeaten tour and their last defeat had been against the Springboks in 1921. In the first eight minutes Freethy handed out three warnings to the battling forwards. When Cyril Brownlie allegedly stamped on a prostrate English player he decided it was time for a player to walk,” recalled rugby historian Dai Richards.

The Newport prop Reg Edwards, who was overlooked by Wales and went on to win 11 caps for England and play in three Grand Slam sides, was at the centre of the early skirmishes and was the player on the receiving end of Brownlie’s boot. He was later reported to the RFU by Freethy and never played for England again.

England were unbeaten at Twickenham in 12 years, but even though they had a one man advantage for 72 minutes they still couldn’t find a way to beat the All Blacks. It was the final act of their 28 match tour and they were in no mood to lose their unbeaten record. They went on to win 17-11 before completing their tour with two wins in France and two more in Canada.

So highly regarded by the tourists was Freethy that he controlled six matches on that tour, including the Tests against Ireland and England. In total he refereed 18 international games between 1923-1931, as well as the Olympic Games final between France and the USA in Paris in 1924. He was also the man in the middle for six Varsity Matches

He was also a wonderful coach and a fine administrator, serving on both the Neath and Welsh Rugby Union committees for a number of years. A teacher at Alderman Davies School he also became a Welsh selector.

“Arguably, it was not the scholastic credentials that provided the basis for the Welsh rugby renaissance, but organisation and opportunity for regular coaching. The best organised, most regularly coached, most attractive and consistently successful side of the 1920s was not strictly a school side at all: it was a team of ex-schoolboys, gathered together and trained under the watchful and authoritarian eye of Albert Freethy of Cwrt Sart School, Neath.

Freethy’s own playing career as a full-back had been cut short by injury, but he went on to make more than a name for himself as one of Wales’s finest referees. The first W.R.U. referee invited to control a club match in England (Blackheath V Cardiff, 6 November, 1920) he officiated at six Varsity matches ,the Paris Olympic Rugby final of 1924, and sixteen internationals between 1924 and 1931.

He immortalized himself by sending off Cyril Brownlie, of the 1924-5 All Blacks, in the eighth minute of their international at Twickenham, in front of the Prince of Wales. It was an action for which he was roundly condemned, although having warned both sides three times already, he was entirely within his rights in sending the next offender off. Whether Brownlie was the real culprit is debatable; he was certainly the offender Freethy saw, but many of those present thought Reg Edwards was very lucky not to be accompanying him.

Despite the obloquy heaped on him by uniformed critics (including Welshmen: Teddy Morgan grimaced at ‘this nasty decision’) and contrary to popular belief, the incident did not blight Freethy’s career as an international referee, for he went on to officiate at thirteen matches, five of them at Twickenham.

He was elected to the W.R.U. in 1926 and subsequently became a selector, but in Wales at least, his fame stemmed mostly from feats achieved by his ex-school boys team. It was a side composed mostly of Neath boys who had played in a local schools league and had been invincible in the Dewar Shield schools rugby competition in 1922 and 1923.

Freethy kept the side together, and they became renowned throughout South Wales. A noted disciplinarian, the autocratic Freethy instructed his boys in technique on the field, and tactics on the blackboard. They played exciting, attacking, running rugby.

In their first full season, 1922-23, they played on the Gnoll and made £100 for Neath and £700 for charities. They went undefeated for four years, and their backs – Trevor Walters, hailed as another Percy Bush at fly-half, Sam Bates and Griff Bevan at centre, Howie Jones and Arthur Hickman on the wings – were easily the peer of the best in senior football.

In February 1925 they met a star-studded Christ College, Brecon, side at The Gnoll, and beat them 6 – 3 in front of a crowd of 5,000. In February 1926, they beat Llandovery 18 – 4 and Christ College 18 – 5 within a week. Such was the success, and the attractiveness, of Freethy’s brilliant youngsters that friction developed with the Neath club.

Neath understandably, wanted to include some of them on its own side, but Freethy felt that ‘the spirit of Welsh rugby was not that it should be’, and asked to be allowed to keep his side together for a couple more seasons; were he to release a few now, the whole side would disintegrate.

Smarting at Freethy’s refusal, Neath refused him the use of The Gnoll, but playing at Cwrt Herbert, the ‘Invincibles’ still drew larger crowds than the town team. They lost their invincibility at Cardiff Arms Park on 30 April 1927, to a Cardiff ex-schoolboys team including Norman Fender and Tommy Stone. It marked the end of an era of ex-schoolboy rugby, and the concept of youth rugby would not be revived until the 1940s but several of Freethy’s stars orbited into senior football.

Neath, certainly, owed its great season of 1928-29, when only four matches in 49 nine were lost and 930 points scored, to the influx of ex-schoolboys like Howie Jones, Arthur Hickman and Tom Day, all of whom went on to win full international caps in the early thirties.” 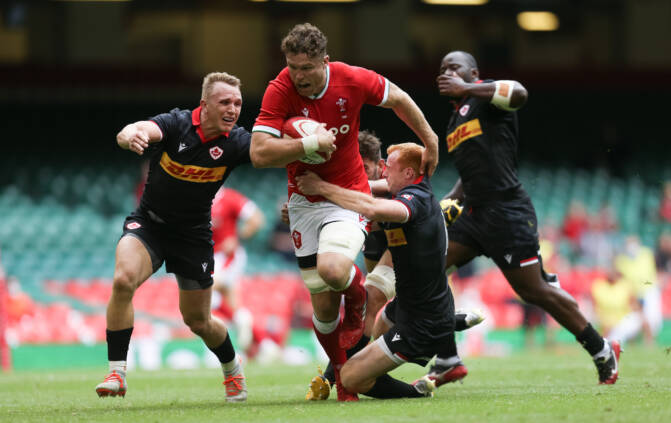 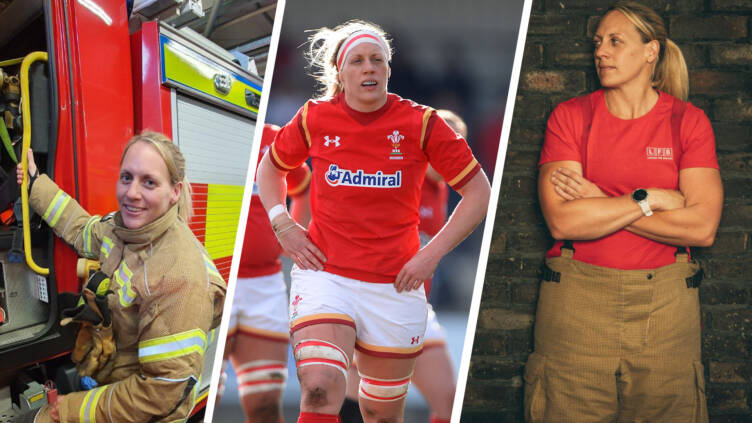