When Dan Edwards steps up to kick for Wales in the Six Nations U20 Summer Series he will have the words of one of the game’s greatest goalkickers ringing in his ears.

The 19-year-old outside half already has three U20 caps to his name and ended the season at Aberavon with the Young Player of the Year award as well as the gong for the Most Improved Player.

Now he has his sights firmly fixed on getting even better and on that front, he has been getting some expert advice to help him along the way.

Leigh Halfpenny may still be battling his way back to full fitness after his latest injury, but the Scarlets star hasn’t been sitting idly by in the interim. He worked with the U20s during the Six Nations and has been giving Edwards the benefit of his expert knowledge ahead of the trip to Italy.

“I’ve been incredibly lucky with getting advice from so many people. At Aberavon, I’ve had Aled Thomas to lean on, James Hook works with us at the Ospreys and then there is Leigh Halfpenny with the U20s,” said Edwards.

“You can’t really go wrong when you are getting help from people like that. Aled has helped me out a lot with my kicking, especially with my re-starts, while James has done a lot of work with me on kicking off the tee. 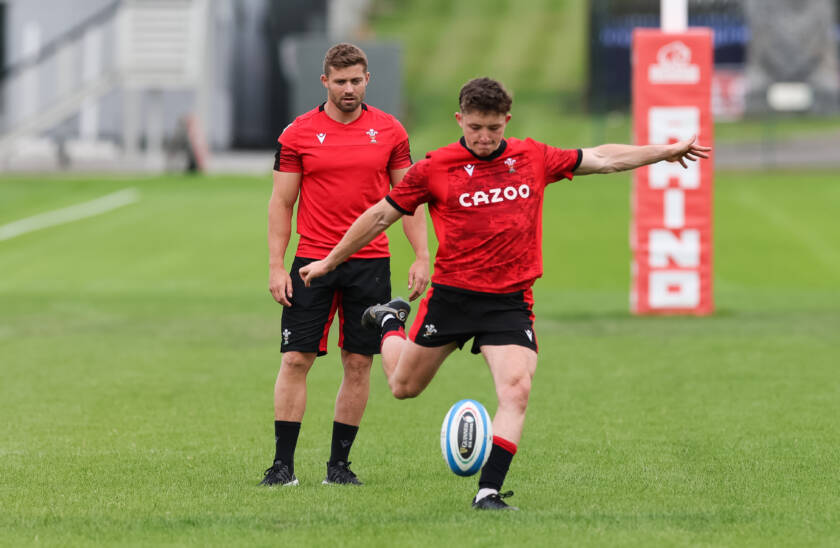 “Leigh, like James, is a British & Irish Lion and he comes across really clearly in what he wants us to do. He has been a very good help with basic stuff like getting through the ball and staying tall.

“If you are confident off the tee it helps and it has been great having Leigh around, He always talks about confidence being one of the keys and I always feel that if I get the first one then I can kick them all.

“You find that some places are a bit more hostile than others, but you just have to drown it out and stick to your routine. I like being in pressure situations, it shows your character and who you are.”

He is due to find himself in one of those situations ahead of the opening game against Scotland when he has a kick-off with fellow Osprey, Joe Hawkins. Both are competent goalkickers and whoever comes out on top is likely to fill the role in Italy.

“I’m having a competition with Joe to see who will be goalkicking at the weekend and that will be a good contest,” revealed Edwards, who will celebrate his 19th birthday on 5 July.

We didn’t do as well as we thought we could in the Six Nations, but we all know we are in a better position now. We all believe we can go to Italy and win four out of four.”

With Thomas and Mason Grady set to line-up in the midfield outside Edwards, and the Exeter Chiefs trio of hooker Ollie Burrows and locks Dafydd Jenkins and Christ Tshuinza up front, head coach Byron Hayward has a much stronger group to pick from for the games against the Scots, Italians and Georgia in the pool stages. 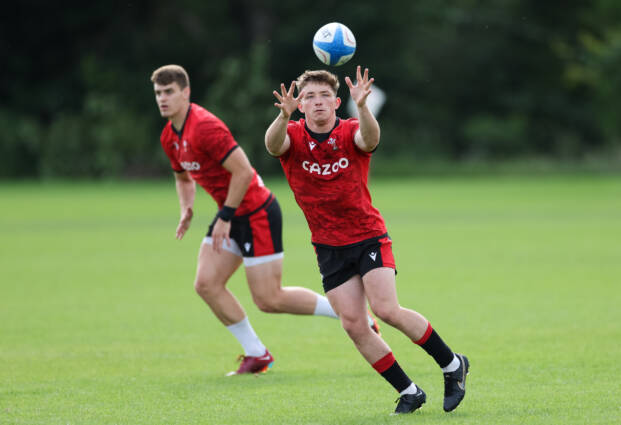 “It’s not just about a starting XV and a bench, it is about starters and finishers, especially in the heat we’ll be facing out there. It was great to be able to represent my country in the U20 Six Nations, although the first game in Ireland didn’t go well for us, and I can’t wait to get started in Italy.

“I came off the bench against Scotland and England before picking up an injury. I was still able to finish off the season with a nice run of games at Aberavon and I also got 20 minutes in the Premiership final at Principality Stadium.”

There is little doubt that getting game time in the Indigo Group Premiership with the Wizards has enabled him to push forward with his dream of becoming a full-time professional player. The now 36-year-old, the winning try scorer for Wales when they won the World Cup Sevens title in Dubai in 2009, Thomas has played a major role in nurturing Edwards’ talent.

“It was a tough start to last season without many games, but then I broke into the Aberavon squad. I had a good game at Carmarthen Quins and had a good run of matches from there,” said Edwards.

“I get a lot of help and advice from Aled Thomas. He and some of the other senior players outside me guide me and give me a lot of confidence to go on the pitch and do my job. 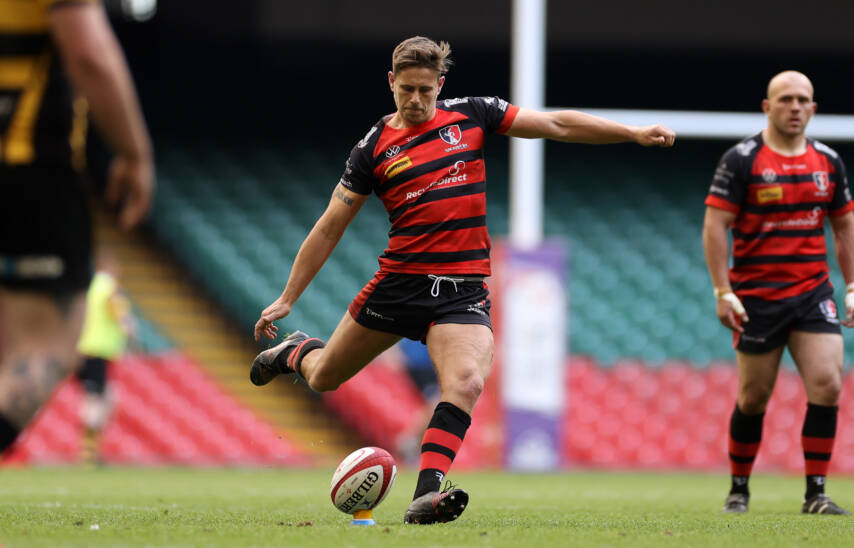 “I took little bits off them all last season and I think I got to grips a bit more during the season with the kicking battle that goes on in many games. Having regular game time was really good for me and I also got a couple of runs at full back, which helped me to see the game from a different angle.

“I want to pursue a career in the professional game and I believe there is a massive opportunity for me at the Ospreys next season. I just hope I can get some game time.”

Rugby certainly does dominate the life of the teenager from Cwmavon. Born and bred in the village that is two big punts away from the Talbot Athletic Ground, he is a regular pool and darts player at the club most nights or at the weekend.

Not only that, his commitment to the game has already seen him take up coaching. A former schoolboy player at Ysgol Ystalyfera, he played for the Swansea Valley U15 team in the Dewar Shield.

That was only three years ago, yet when he returns from Italy he will go straight into training with the Aberavon Schools U15.

“I’m a Cwmavon boy born and bred and I love the club and going there with all my mates. I got asked to help out with the coaching of the Aberavon Schools team last season and it was a nice opportunity to take up,” he said. 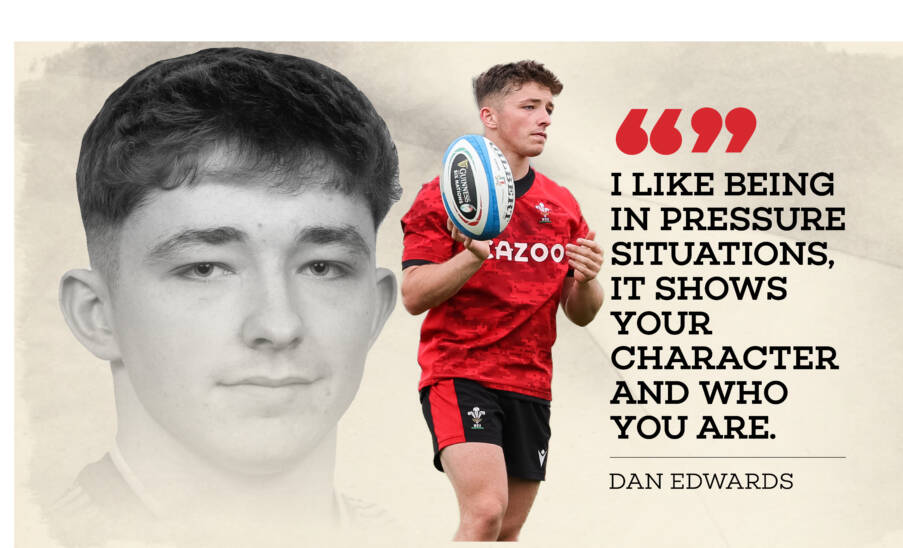 “I love being able to give something back having thoroughly enjoyed my time at their age. I’ve been in their position and hope I can help them out with some advice.

“Dewar Shield rugby is fantastic because you play against boys you don’t know. You get the chance to compete against new teams and push for representative honours with the regional age grade teams.”

For the moment, though, he’s got his hands full concentrating on the playing side. 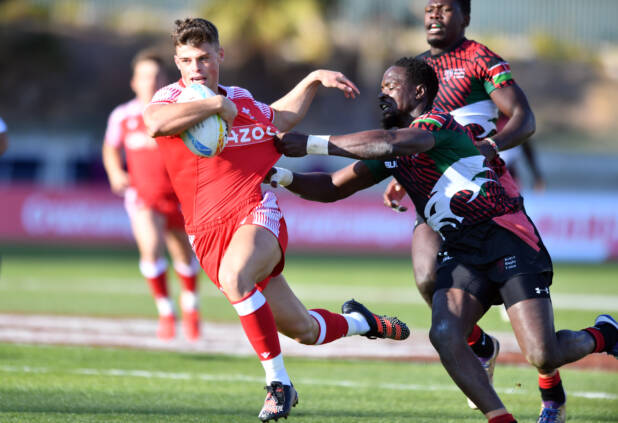